iCub is a toddler-sized open-source robot by the Dynamic Interaction Control Lab at the Istituto Italiano di Tecnologia (IIT). See the iCub robot walk across the lab and interact with a toy in the September 2018 video above. It’s the lab’s latest work on “teleoperated walking and manipulation for humanoid robots.” Some project background from Wikipedia:

The motivation behind the strongly humanoid design is the embodied cognition hypothesis, that human-like manipulation plays a vital role in the development of human cognition. A baby learns many cognitive skills by interacting with its environment and other humans using its limbs and senses, and consequently its internal model of the world is largely determined by the form of the human body. The robot was designed to test this hypothesis by allowing cognitive learning scenarios to be acted out by an accurate reproduction of the perceptual system and articulation of a small child so that it could interact with the world in the same way that such a child does. 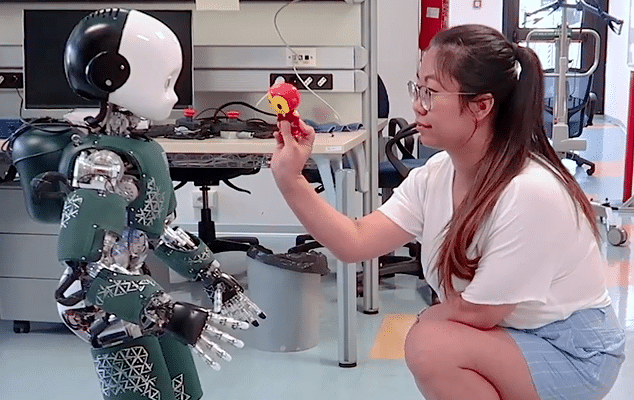 In this case, iCub is controlled by a person with the Cyberith Virtualizer omnidirectional treadmill and a VR system. The bot also has 53 motors and a variety of sensors, including cameras, microphones, joint encoders, inertial sensors (linear, angular, compass), capacitive tactile sensors, and 6-axis force/torque sensors.