At the Mihama Veterinary Clinic in Fukui, Japan, researcher Yusaku Watanabe carefully followed the procedures outlined in the research paper A Novel Shell-less Culture System for Chick Embryos Using a Plastic Film as Culture Vessels to observe fertilized egg embryo development without an egg. Would a chick ‘hatch’ at the end of the standard 21-day incubation period?

The resulting 2017 video above, Observation of the Development of Chick Embryo, shows how Wantanabe fostered a fertilized egg into a fully-developed chick, a feat that, based on the paper, may only happen 57.1% of the time. That’s 8 out of 14 live chicks. As Science Alert notes, this kind of incubation technique could aid in endangered bird conservation: “Not only could it allow researchers to save chicks when their eggs have been damaged, it could also lead to new options for bird IVF, or even growing vulnerable species inside surrogate eggs.” And from Daily Dot:

It’s a bit more complicated than dumping shell contents into plastic wrap and putting them in the incubator. The approach requires buying fertilized eggs from the store, incubating them in the shell for a few days, and then carefully and quickly transferring them to the cup, all using flawless sterile techniques.

You also have to carefully monitor the amount of oxygen, humidity, and calcium in the whole system to make sure the chicks are healthy and happy when they catch. Natural egg shells are permeable to oxygen and carbon dioxide, which is what lets the chick embryo breathe during incubation. So the plastic wrap must also be made permeable to these gases—usually by making a small hole at the top of the bag. 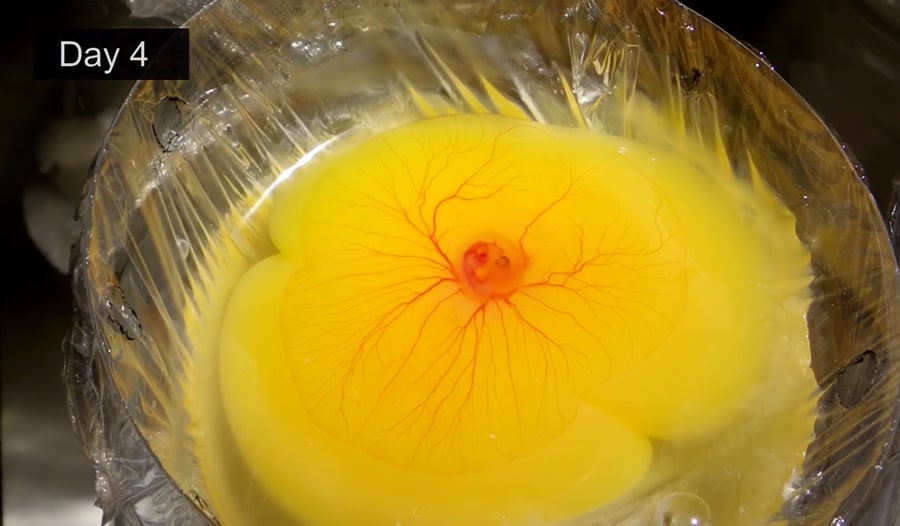 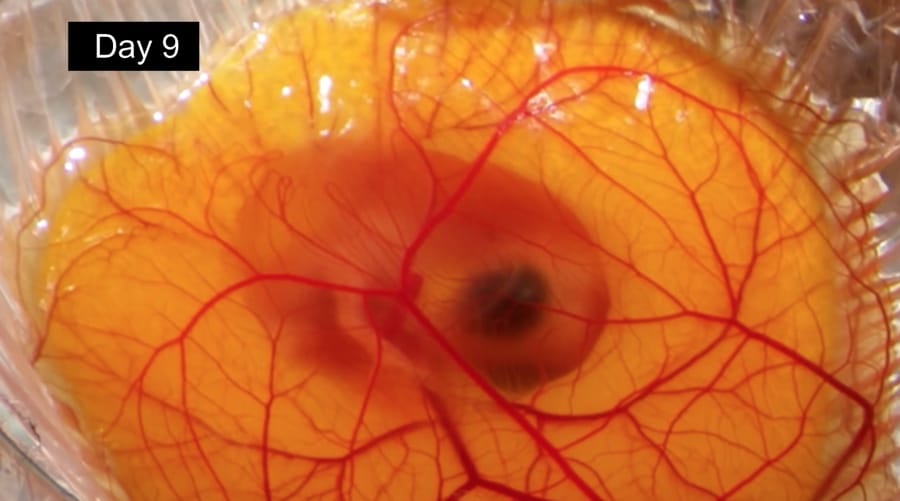 And from the research paper by Yutaka Tahara and Katsuya Obara:

To date, studies of culture methods for bird embryos include the whole embryo culture using narrow windowed eggshells, surrogate eggshells, and an artificial vessel using a gas-permeable membrane. However, there are no reports achieving high hatchability of >50% using completely artificial vessels. To establish a simple method for culturing chick embryos with high hatchability, we examined various culture conditions, including methods for calcium supplementation and oxygen aeration. In the embryo cultures where the embryos were transferred to the culture vessel after 55-56 h incubation, more than 90% of embryos survived until day 17 when a polymethylpentene film was used as a culture vessel with calcium lactate and distilled water supplementations. The aeration of pure oxygen to the surviving embryos from day 17 yielded a hatchability of 57.1% (8 out of 14). Thus, we successfully achieved a high hatchability with this method in chicken embryo culture using an artificial vessel.

At The Exploratorium in San Francisco, a Live Chicken Embryos exhibit demonstrates embryo development during the first week of a 21-day incubation period, including the development of blood vessels, a backbone, wing bugs, eyes, a brain, and a beating heart:

Watch these videos next: How Birds Get Oxygen Inside Their Eggs, The Field Museum’s amazing egg collection, and From zygote to hatched larva, a cell division time lapse.