785
SHARES
ShareTweet
Watch more with these video collections:
animationblack and STEMcratersengineeringexplorationgeologyhelicopterhumanityjpllakelifeMarsmicrobesNASAplanetsrocketssciencespacetechnologyVehicleswaterWomen in STEM

Did life ever exist on Mars? We’re on a mission to find out. On July 30th, 2020 at 7:50 a.m. EDT, NASA is slated to send their fifth Mars rover on its journey to the Red Planet. The Perseverance rover and a small helicopter named Ingenuity will be searching for signs of ancient microbial life in the preserved river delta of Jezero crater. Its expected landing date is February 18th, 2021.

Narrated by Octavia Spencer, We Persevere is the mission’s exciting promotional trailer.

There are a lot of firsts on this mission. Three big ones: Ingenuity is designed to be the first demonstration of powered flight on another planet; there will be microphones on Perseverance; the rover will also be sealing its drill samples in small tubes, leaving them on the planet’s surface for future missions that can send them to Earth. 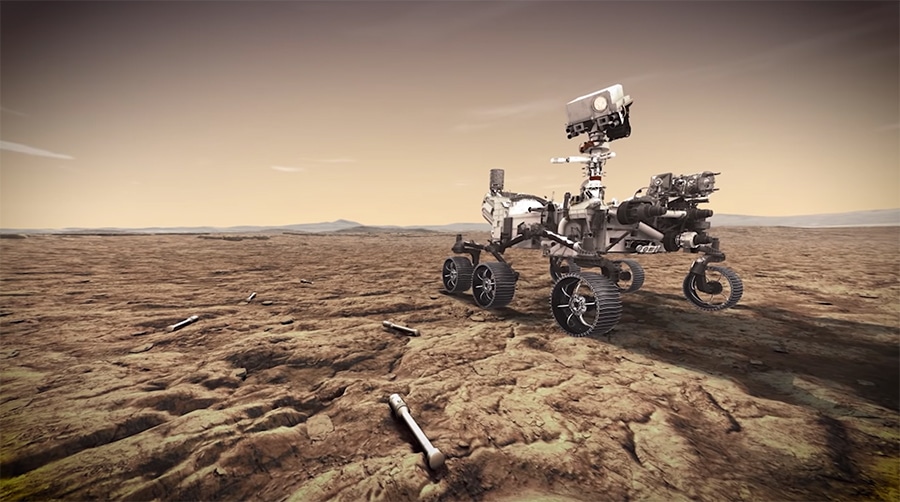 Jezero, which means ‘lake’ in Czech, Bosnian, Croatian, Serbian and other Slavic languages, was specifically picked as a landing site because there’s evidence that it was full of water more than 3.5 billion years ago. And where there was water, there might have been life. From The New York Times:

No one expects to find the Martian equivalent of dinosaur fossils, shark teeth or seashells. If life arose on Mars, it likely resembled what existed on early Earth — single-cell microbes in oceans, lakes and rivers.

Even on Earth, these microscopic organisms did not leave behind recognizable fossils. The evidence of this ancient life is difficult to discern and sharply debated.

Still, Mars scientists think they might be able to detect patterns in rocks that could have been the work of microbes.

Watch NASA JPL’s animation-filled overview of the mission to learn more, including why the 49-kilometer (30-mile) wide crater is such a sweet spot for exploration.

There are more rover videos on TKSST, including Curiosity’s Seven Minutes of Terror and The Mars Helicopter, NASA’s small autonomous rotorcraft demonstration.