Fly over Lake Hillier, a stunning pink lake on Middle Island, off the south coast of Western Australia. This footage was filmed by Jaimen Hudson, who captures Australia’s natural wonders by drone.

Lake Hillier is about 600 metres (2,000 ft) in length by about 250 m (820 ft) in width. The lake is surrounded by a rim of sand and a dense woodland of paperbark and eucalyptus trees with a narrow strip of sand dunes covered by vegetation separating its northern edge from the northern coast of Middle Island. The most notable feature of the lake is its pink colour. The vibrant colour is permanent, and does not alter when the water is taken in a container. The pink colour is considered to be due to the presence of the organism Dunaliella salina.

A halophile (loves salt) and an extremophile (loves extreme conditions), Dunaliella salina is an algae that produces carotenoids, which can look orange, red, or pink.

2022 update: In a 2015 study, other found organisms, including a pinkish-red bacteria called Salinibacter ruber, are also attributed to the phenomenon. Watch Why does Australia have hundreds of bright pink lakes? 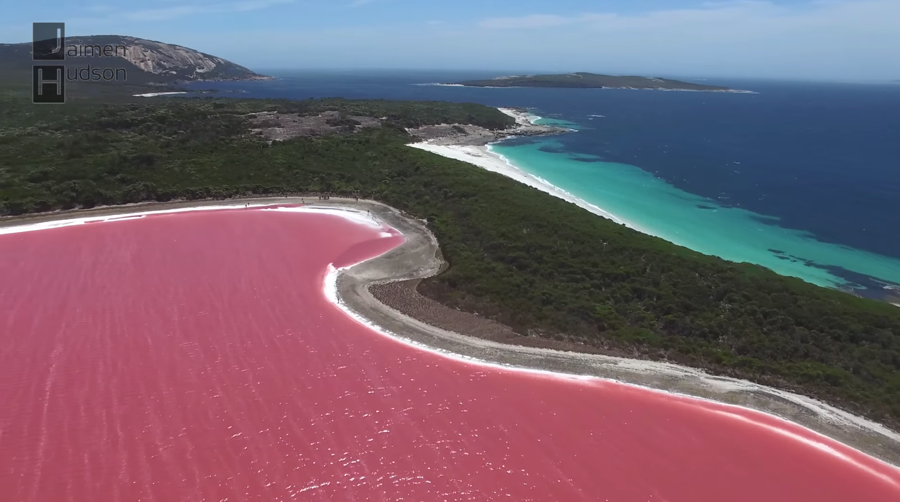 Plus, a related fact: Flamingos “range from light pink to bright red due to aqueous bacteria and beta-Carotene obtained from their food supply.”

More incredible sites by Hudson’s dronework: Whales swim with a paddleboarder off the coast of Esperance.

Why do leaves change color?

The Real Reason Leaves Change Color In the Fall – MinuteEarth