This video is 15 full minutes of amazing. And the best part of watching is that these puppet activities will no doubt inspire kids of all ages to create their own muppet-like characters. Watch Jim Henson and muppet designer and builder Don Sahlin demonstrate how to make puppets from socks, tennis balls, cloth, wooden spoons, potatoes, and other things you can find around the house. 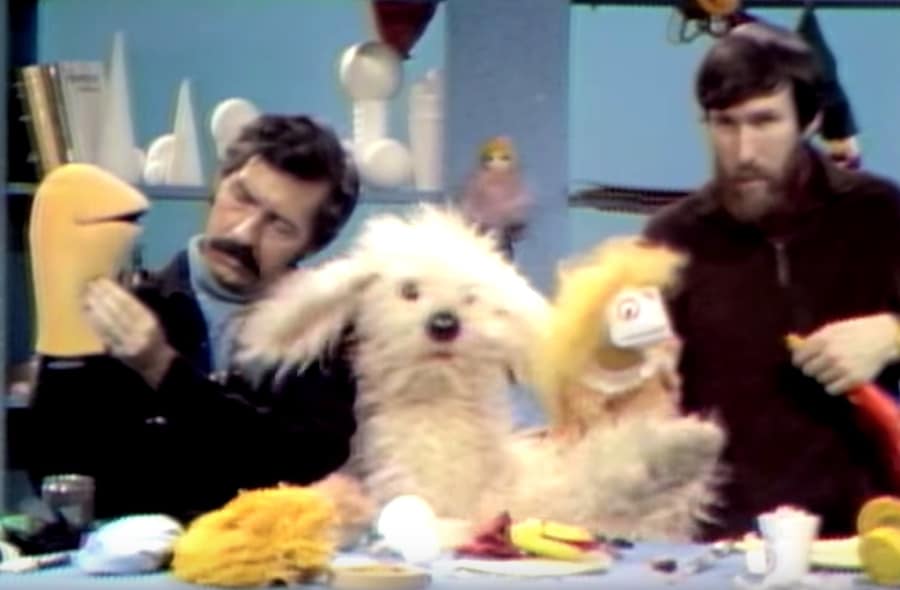 He is “the inventor” of the Muppet look, from a design point of view. As discussed in the book Jim Henson’s Designs and Doodles, many of the Muppets began as Henson’s rough sketches, which Sahlin then built and modified as needed… Sahlin was known to refer to himself as the “guardian of the essence” of the Muppets.

Beyond building specific characters, Sahlin contributed two significant concepts to the Muppet aesthetic, “the Magic Triangle” and “the Henson stitch.” The former was a simple but effective approach to positioning eyes, creating a triangle in relation to the nose and mouth. Jim Henson explained the importance of eye placement: “It would be the last thing [Sahlin] would do, and he always wanted me there, to make sure it was right for both of us — making sure the eyes had a point of focus, because without that you had no character.”

The stitch is a specific method of sewing cloth as tightly as possible so the seams would be “nearly invisible,” thus aiding the illusion of stylized “reality” when characters were filmed in close-up. This technique, dubbed the “Henson stitch” by Sahlin, does not in fact create a truly invisible seam, but worked sufficiently for television purposes (hiding, for example, the seam down the middle of Kermit the Frog’s snout).

Watch more videos about puppets and dolls for inspiration.

Visual Thinking with Sam and Friends (1959)